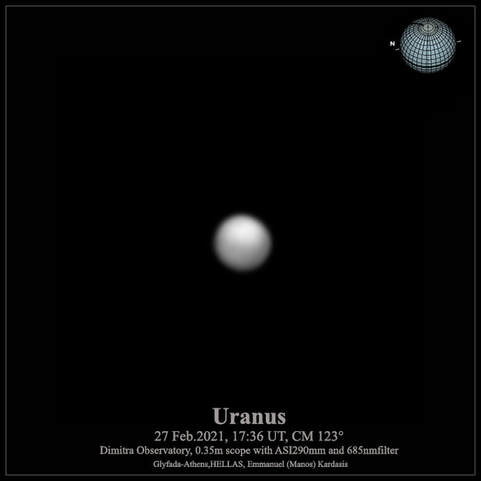 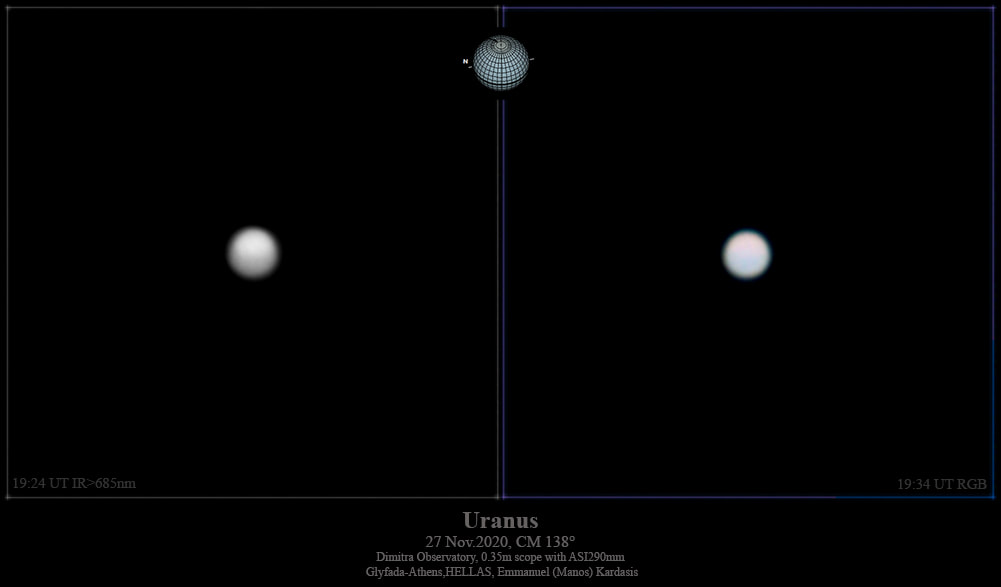 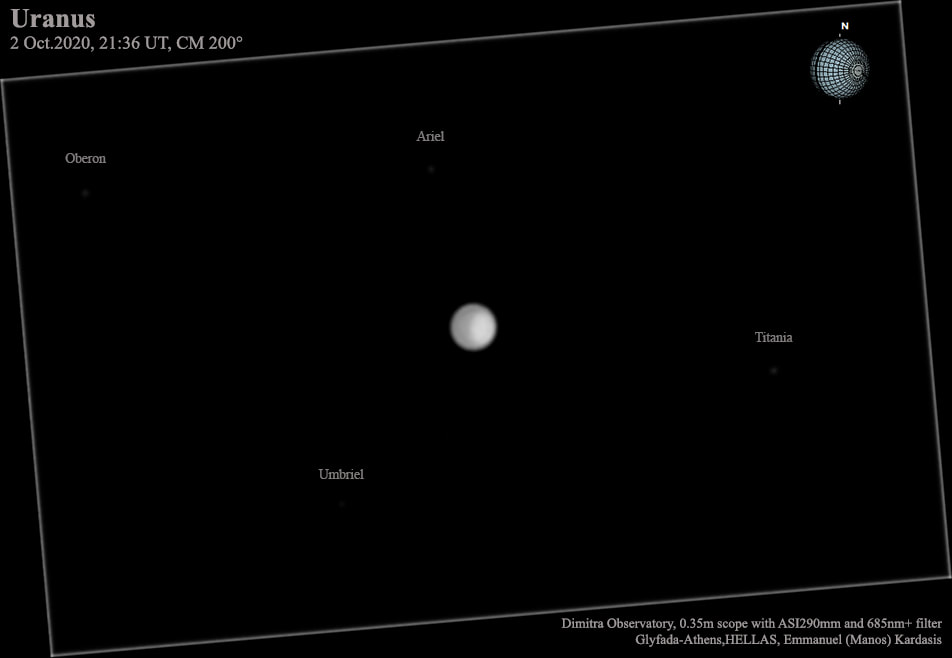 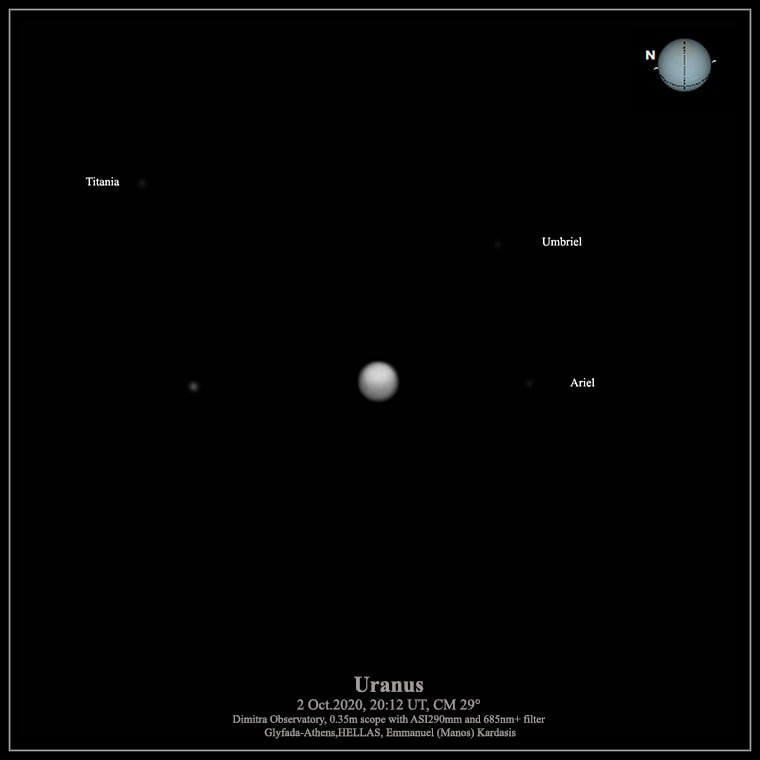 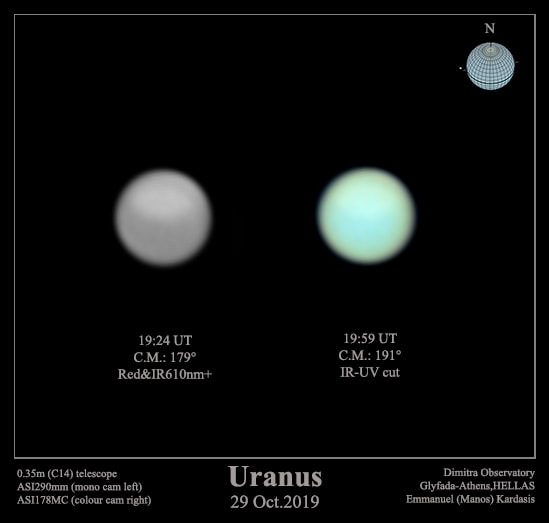 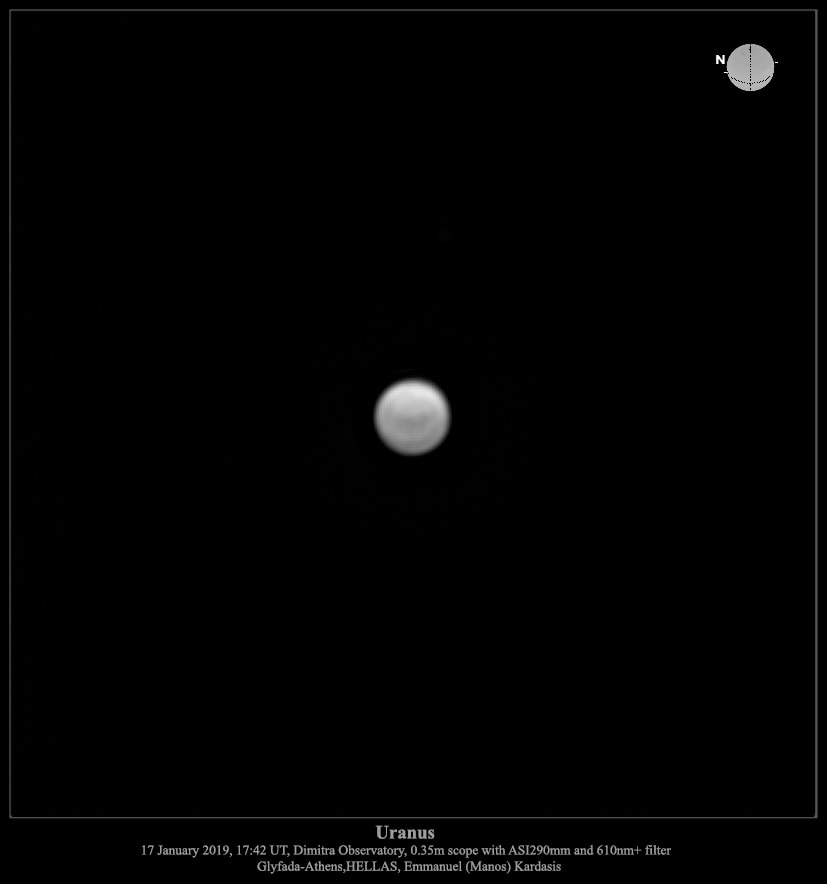 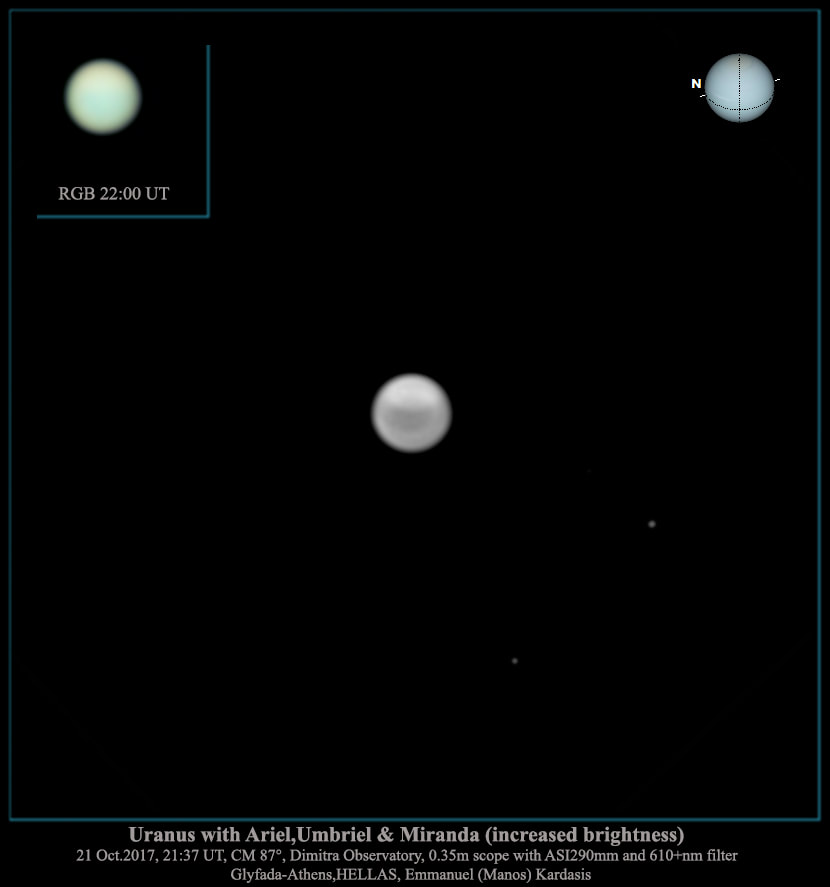 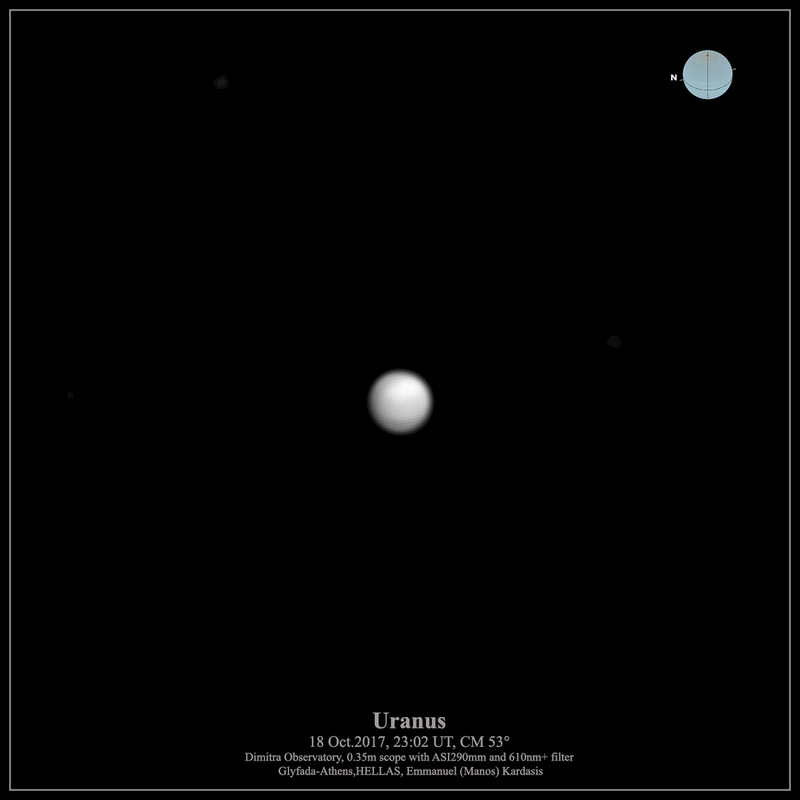 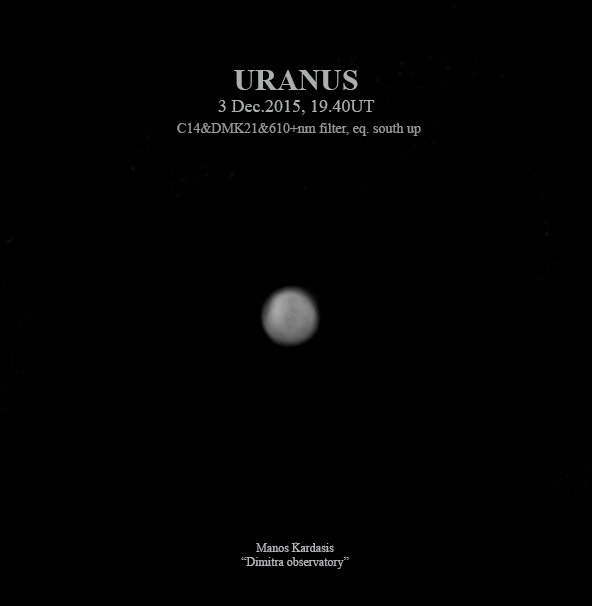 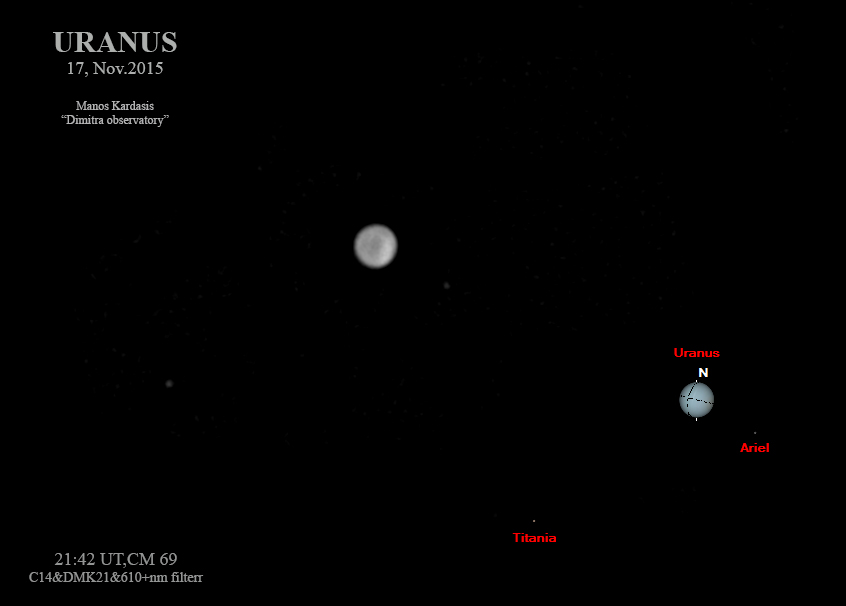 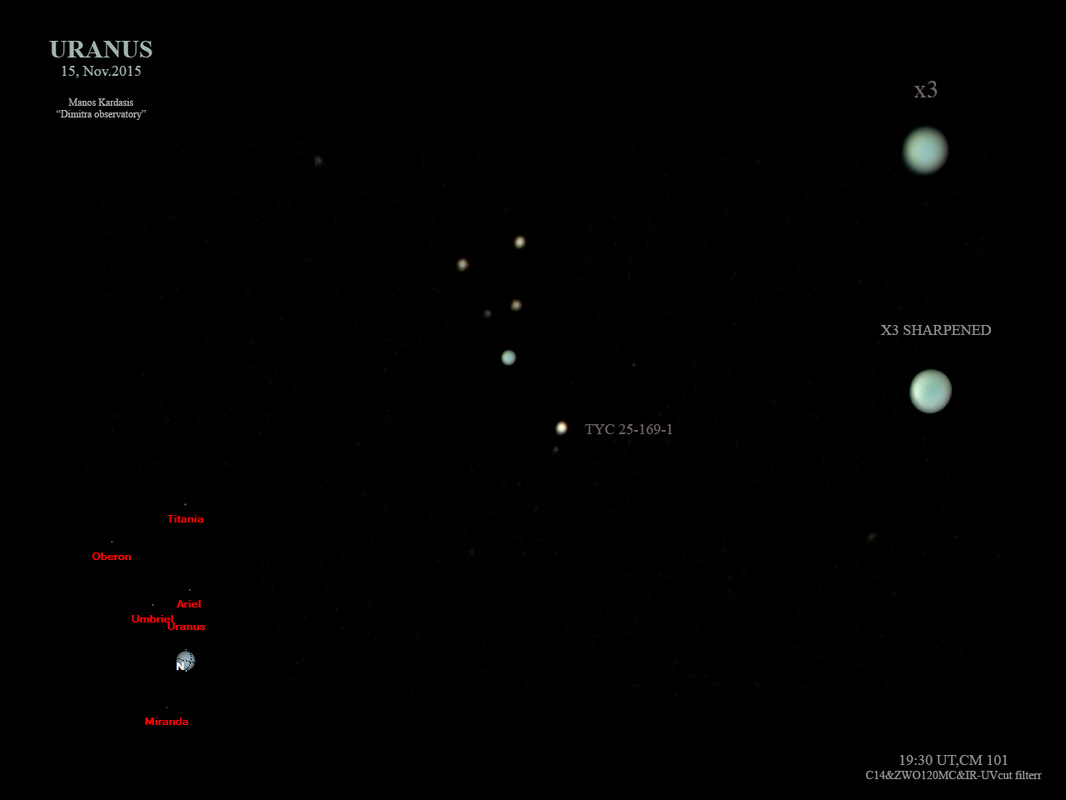 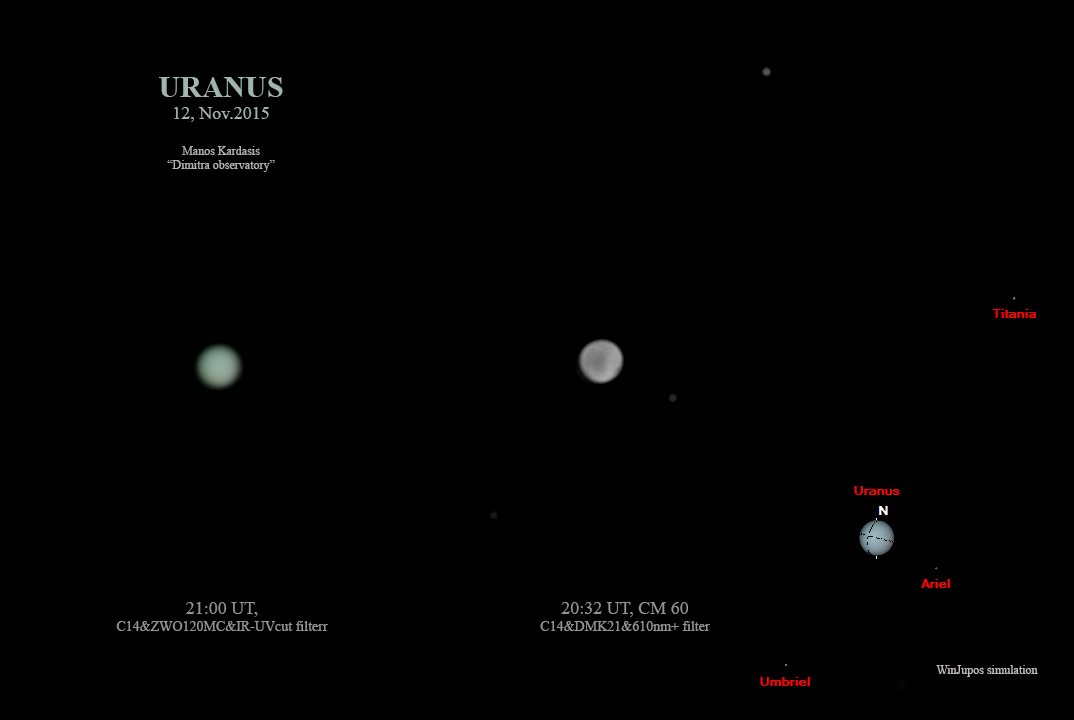 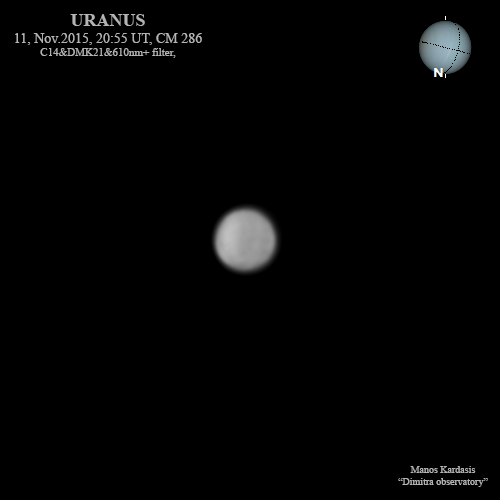 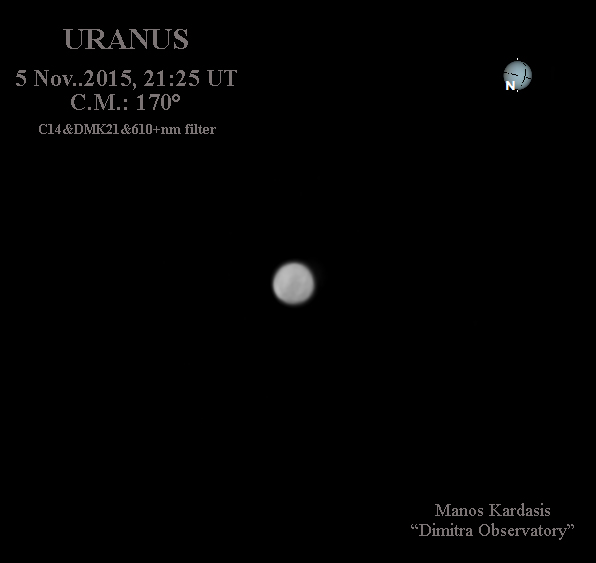 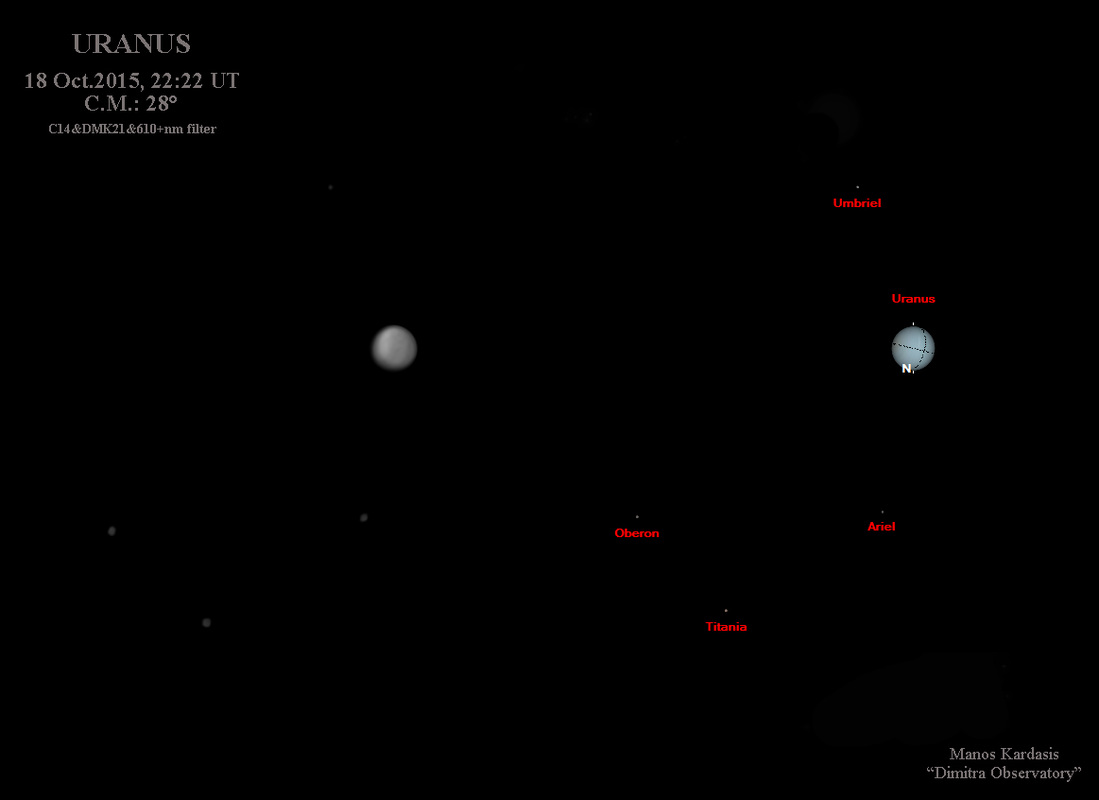 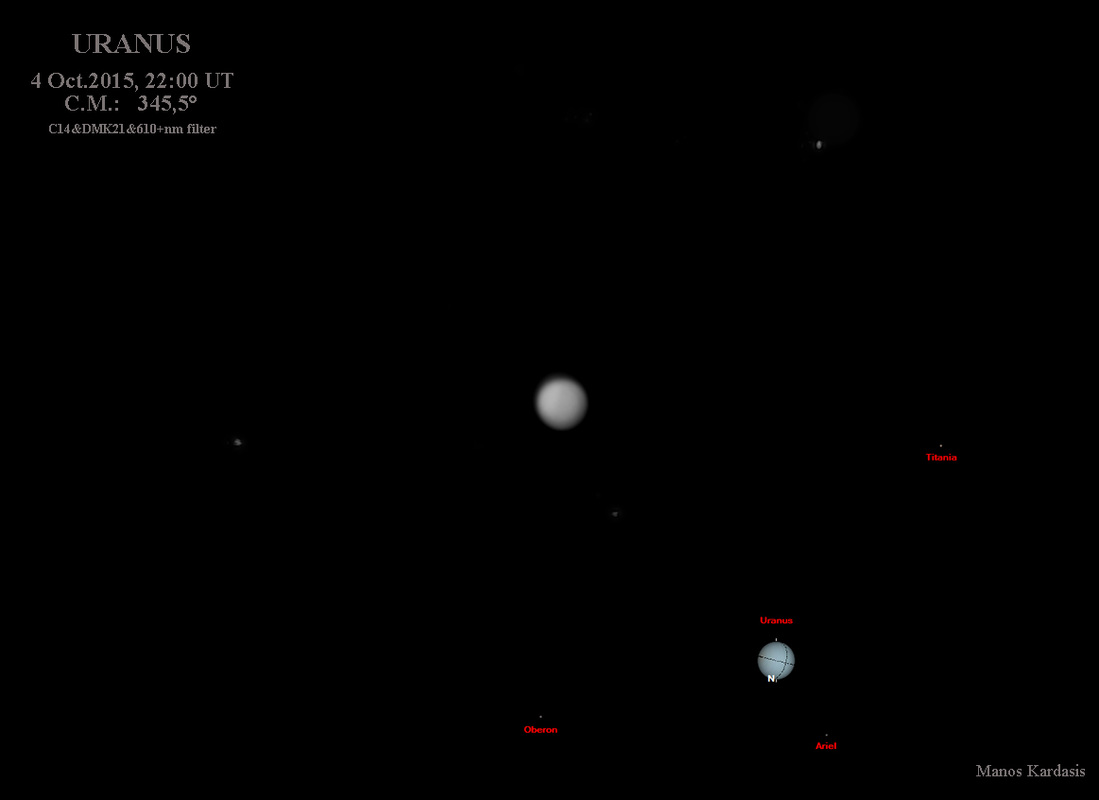 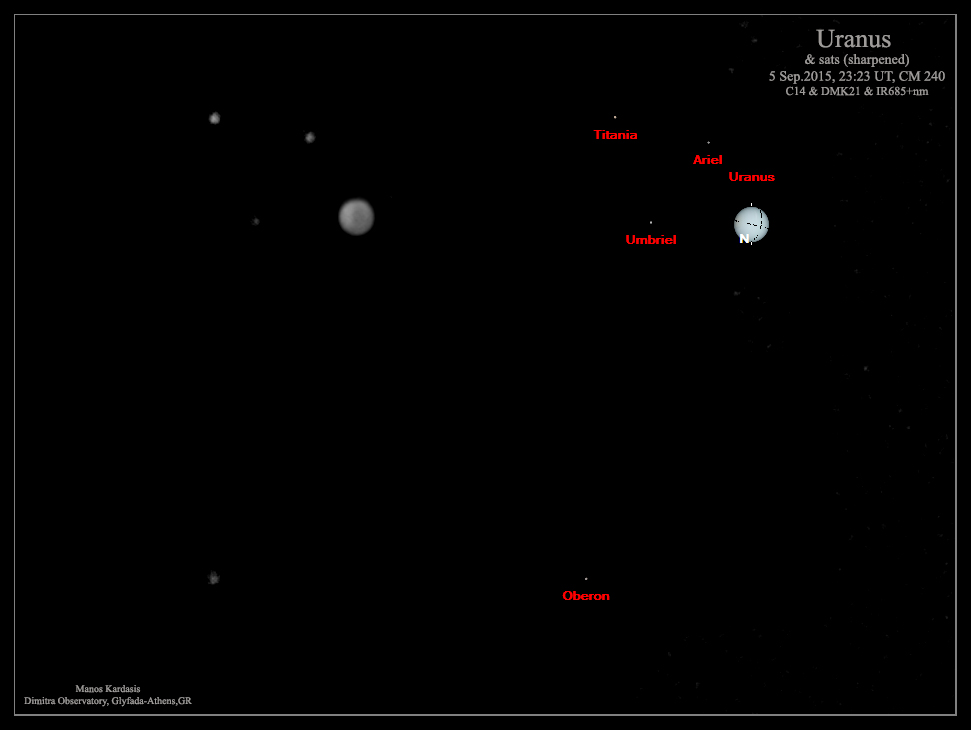 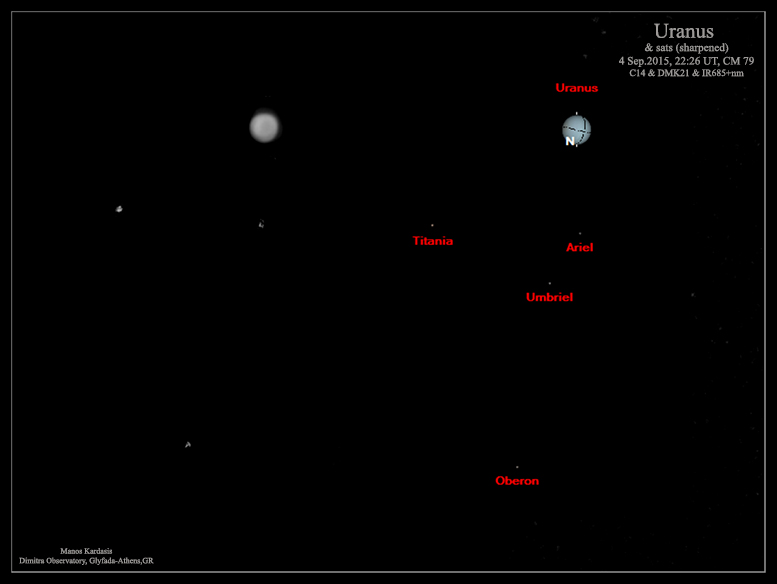 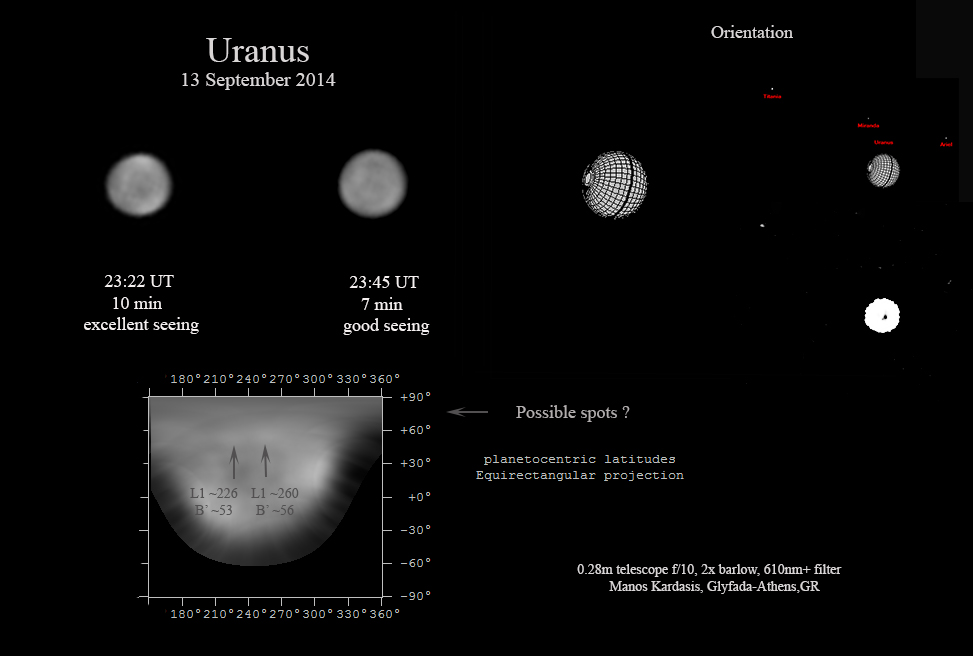 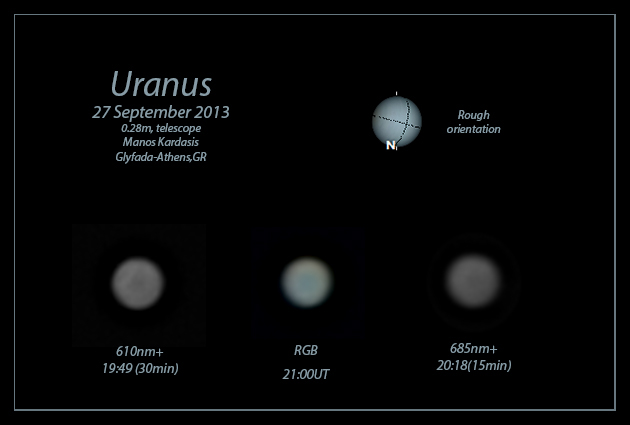 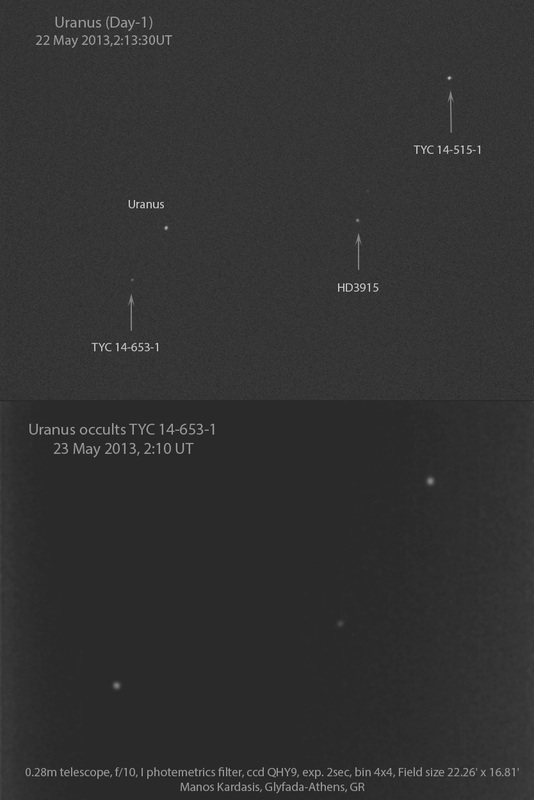 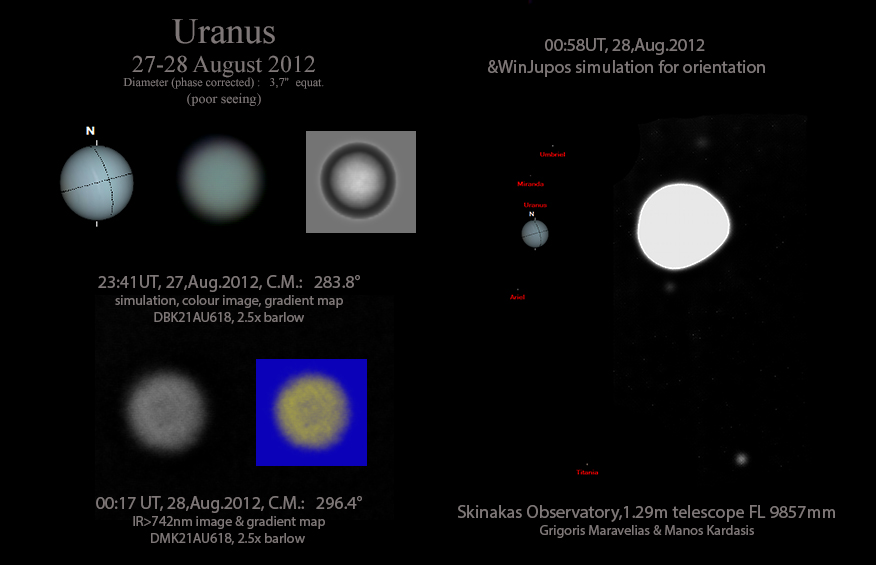 I think my first set of images caused a lot of headacke to many people so  after some hours of work I made the image that follows that clears the clouds.I also made a map and calculated the spot postion at L1 317deg, and B' 8 deg.North. 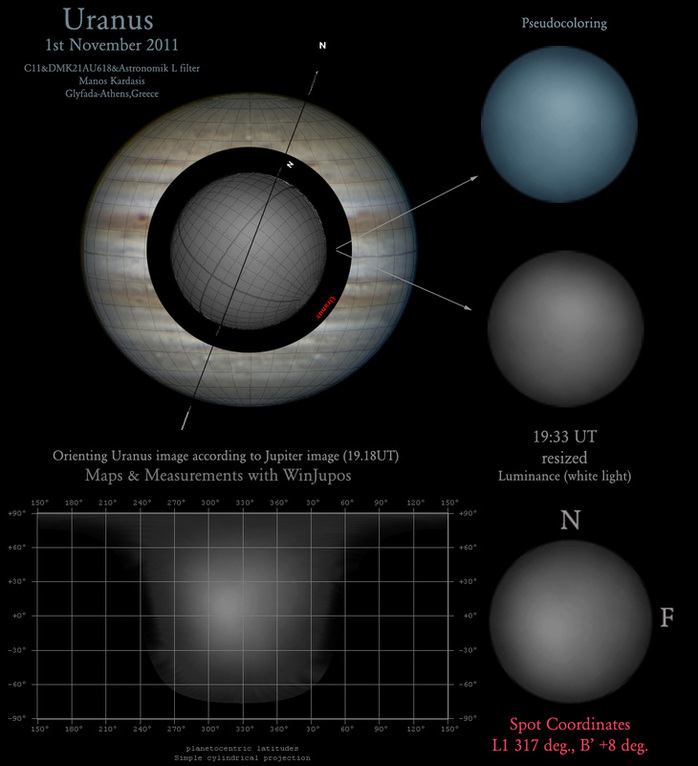 In October 26th an alert (by J.Rogers & G.Orton) about a possible bright spot on Uranus captured by Gemini Telescope triggered me to make some observations. According to PVOL at 21.07 of Nov.1st  there was a possible transit of the spot and seeing conditions were perfect in Athens. After imaging Jupiter (see them at: http://kardasis.weebly.com/jupiter-2011-12.html ) I turned my scope without changing orientation to Uranus in order to make a try on the new spot captured by Gemini.

I captured many videos with white light (L=Luminance),R,G,B and near IR(742-1000nm) filters.In the first image I made at 19.33 in Luminance there was a remarkable spot visible in any proccessing I tried.I had never noticed such a sinificant increase in brightness in past videos of Uranus though this one was with my new camera(DMK21-618AS).

At 19.37 I tried a longer video with better seeing though with different gamma settings, nothing obvious only something in gradient map.
The separate and composite RGB shows nothing. The near-IR image looks like the 19.33 image but imaging at so long focal lengths  in IR is really difficult with small  instruments so the result is poor.The funny thing is that I processed all images that night in order to see something except the video with the spot (until the next day).

I tried the orientation with WinJupos by rotating graphs to match my sky North (see also the notice on the image).The unresized image is also unrotated which means that if I had Jupiter in the field Jupiter South would be up and Followig limb on the right. Here are the images: 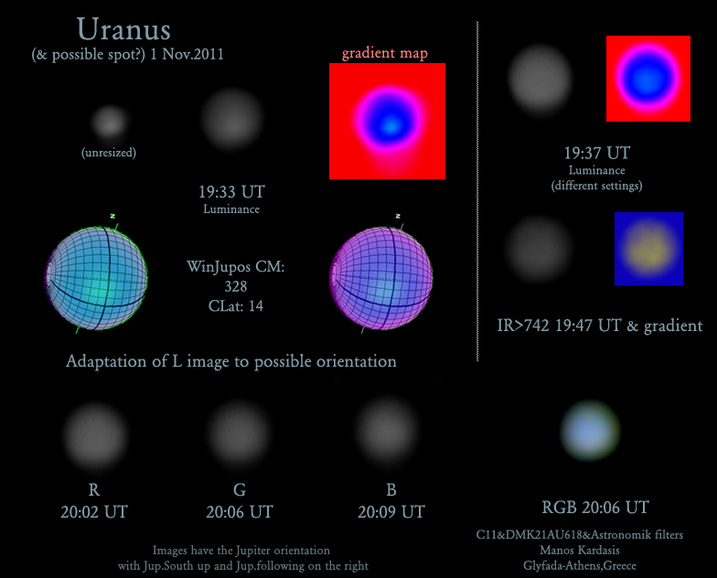 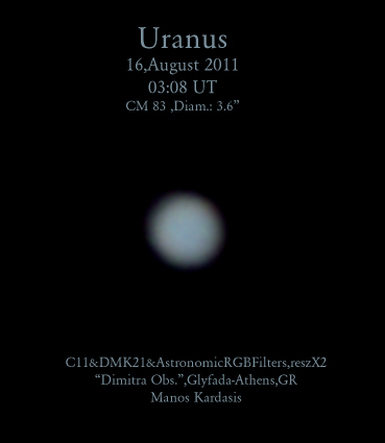 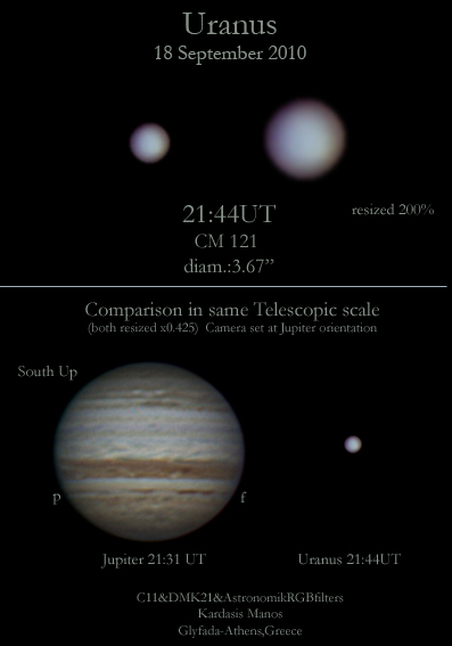 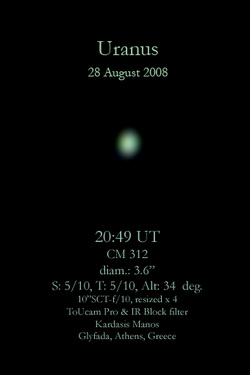 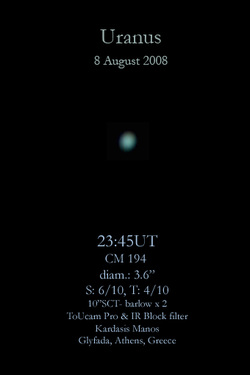 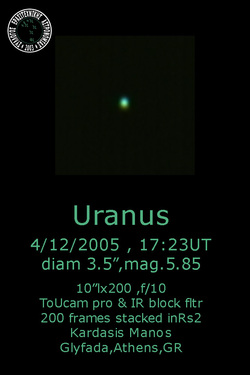